Three days until summer break!  I have to say I am really looking forward to lazy mornings and not having to get the kids to school.  And the kids are looking forward to sleeping in and staying up late too.  It’s been a busy week with everyone coming and going but it’s been a pretty good week all in all.  There are lots of changes coming in the next couple of weeks with school getting out, summer sports and camps starting, the kids getting used to their summer chore charts again.  They are never happy about the increased responsibilities but like I tell them every summer, you have how many hours to play with your friends?  I’m only asking for about thirty minutes of your day.

On Wednesday, Brad and quite a few of the other eighth grade boys from youth group got together for dinner at Valentino’s and had a “True Love Waits” commitment saying they are making the choice to honor God and their future wives by waiting until marriage to be intimate.  I know Brad is a young man with strong convictions and pray he honors that commitment.

I found this picture of Sidney when her hair was as curly as can be.  We never took her in public without someone making a comment on how cute her hair was.  This is one of my favorites. 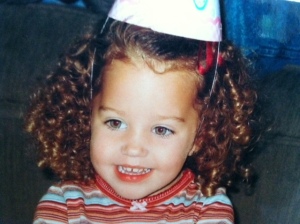 And then of course another favorite is her with her hair brushed out.  Years ago my sisters actually asked if it was a wig on her head but no, it’s really her hair.  Some people would give an arm to have all that hair!  This picture makes me smile.

And sweet Trevor, my baby who is growing up so fast and heading to junior high this fall….He spent Friday at the Omaha zoo with his class and got to spend the day with several of his best friends.  They all had fun, and Travis went along just like he did with the older two kids.  This week they are all going to a baseball game then the fifth grade party is Thursday night.  I don’t know how he grew up so fast.  It seems it was just yesterday we had to watch him like a hawk because he loved to flush everything down the toilet or put it in the trash.  I’m amazed all our plumbing is still intact. He was a very sweet, but sneaky and naughty toddler!

And Mr. Ryan had to come to the ER to visit me this weekend because he got a huge splinter stuck in his finger.  Alli and Sidney couldn’t get it out so they brought him to me, and the staff helped our PA.  It took five of us holding him down to get it out.  Poor kid doesn’t understand but he did calm down when he got to ride around the ER in a kid wheelchair, of course, pushed by his beautiful big sissy.  On a good note his GI system is not getting worse.  He is tolerating four boluses into his stomach every day but is still having frequent belly pain.  We still don’t have his system back to where we’d like it to be, and maybe never will, but at least he is home.