September already?  Really?!  Oh how I looooove the fall.  Football.  Volleyball.  Sweathshirts.  Sitting on the deck at night with Travis wrapped in a big blanket. Pumpkins. Getting all my “cold weather” recipes out.  Changing colors. Falling leaves.

It’s been a trying period for Travis and me, and as the seasons are changing with school back in session, the weather getting cooler soon, sports starting up again….nothing seems to be changing with the job situation. We’re waiting. And we both question what God is doing right now.  It’s been nearly four months since Travis finished his master’s degree and while he has applied for quite a few jobs, nothing has worked out so far. We both have some tugging on our hearts of what direction we might be heading but there’s that imperative question of  “are you sure, God?  how are we suppose to do that?”  It keeps coming up.  That continual thought of “well if that’s another door closed, then where are we suppose to be?” continued with “just show us what you want us to do!” followed by so many comments that go something like this: “just keep praying, God will open the door at just the right time”.  Ugh…do you know how hard it is to be patient and wait?  I feel like that’s all I do….wait.  And I’m not a big fan.  I am more of a “well let’s get it done and cross it off the list so we can move on to what’s next” kind of person.  I’m not patient.  At all.  Not. A. Drop. Of. Patience. In. My. Bones.  You’d think I’d have gotten it by now.  Yeah, not so much. And I hate not knowing what the future holds for us.  But then I have to laugh at myself because while I’m a planner, there has been absolutely nothing planned, laid out or organized about our lives these past several years.  I think of all the hours we’ve spent waiting with Ryan.  Waiting for diagnoses.  Waiting for therapy to work.  Waiting to see doctors.  Waiting for test results.  Waiting for developmental progress.  Waiting for surgery day. Waiting for him to talk. Waiting.  Waiting.  Waiting.  But I’m still not good at it.  Last year we were waiting for this…..

And Ryan survived.  We all survived.  There are plenty of scars to prove to the world everything that cute, chubby faced little boy endured.  And while removing a huge part of his brain during three massive surgeries and ten days in the PICU didn’t fix his problems, it did make things better in some ways.  And in the same way, we know things are going to turn around with the job situation. But right now we have to wait.  Did I mention I hate to wait?  This is not an easy season for many reasons that are very deeply personal and private. Travis and I both understand that everything happens for a reason, that we are supposed to be in this season for a very specific purpose.  But it’s hard.  It’s just simply hard.  And it hurts. And it’s just difficult.  But we are waiting for a reason.  Waiting for answers to our questions.  Waiting for God to move.  Waiting for the right door to open.  Of course I am usually found screaming at God “hurry up! I’ve had about enough of this waiting game!”  But I know when I get to the other side of this period, there is going to be a blessing.  There always is.  Just like the blessing that came with Ryan’s surgeries last year….a happier, more content little boy.  He’s still very broken, but he’s happier and calmer.  And I hope that when we get through this time of waiting, we are better because of it just like Ryan.

I had to giggle to myself when I read this post from one year ago.  I was thinking about how much waiting we were doing for Ryan’s surgery dates, waiting for Travis to get done with his internships.  It was the first football games of the season for the boys just like this past weekend.  This is so typical of Sidney and so endearing at the same time.  It’s worth sharing again.

It was tough Sunday afternoon because the boys had back to back games at 1:00 and 2:15 (which didn’t start til 2:40) and it was very windy out at the field.  Well Ryan stuck it out for twenty minutes before I had to take him and Sidney back home.  He just couldn’t handle the people, the wind, the noisy whistles and yelling.  I felt terrible asking Sidney to go home and watch him since Travis had to head to work but she, like always, was a great sport.  Trevor’s team played first and they lost 0-24 so there were some tears and a lot of frustration after that one.  It’s never easy to handle a big loss on your very first tackle football game. He does a great job at linebacker and also played on the offensive line in the second half of the game.  Brad’s team won; he played center the whole game and also did some defensive line playing.  At center he was nose to nose with one of his best friends from church which was kind of fun; they didn’t beat up on each other too much!

By the time I got home with the boys, Sidney had made them notes of encouragement and had them sitting on the table with ring suckers – I had to call her before we got back so she knew if they won or lost so she could write their notes accordingly.  She had also made cookies for Brad’s swim party which turned out great.  Then as I was getting ready to take Brad to his party and head to work, she asked if she could make a homemade pizza.  She made pizza dough from scratch, thawed and browned the hamburger and made the entire pizza all on her own with absolutely no help.  She amazes me every day with her independence and ability to take on any challenge.  The pizza was fabulous, and she is turning into quite the homemaker at the ripe age of ten!  She is going to have one very blessed husband when she grows up! 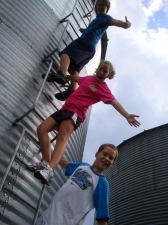 Such great kids.  And no waiting involved to enjoy the blessing they bring to our lives. Every. Single. Day.

One thought on “Wait? No thanks!”